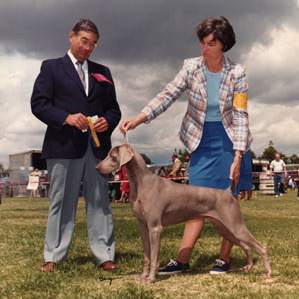 Top Winning Owner-Breeder Handled Weimaraner of All-Time defeating over 16,000 dogs in 1985. Currently this show record still stands to this day! Polly was on the Top Ten show list for 5 years, being nationally ranked #2 in 1984, #1 in 1985 and #2 in 1986. Her wins include Best in Futurity, Best in Maturity, over 200 Best of Breeds, 107 group placements, 36 group ones, and 3 All-breed Best in Shows. The final jewel in her crown was when she came out of retirement to win the 1987 National Specialty in Pennsylvania at 6 1/2 years old!” As a producer, she has 10 Champion offspring including a Dual Champion! 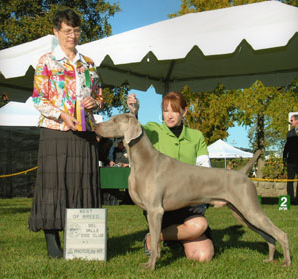 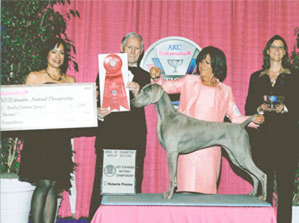 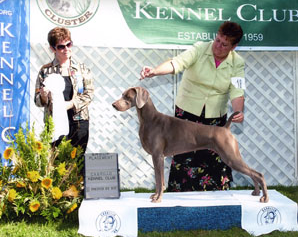 “Maddie was Best Bitch in 2011 WCA Eastern Show Futurity in North Branch, New Jersey under judge Kelly Photopoulos. She has Multiple Best of Breeds, Group placements and is a Specialty winner. Ranked on the Weimaraner Top Ten Show list for 2011 and 2012.” 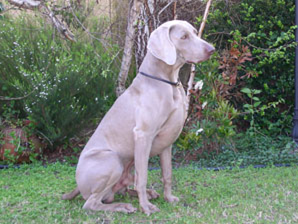 Shaq has had a remarkable career so far…. To date he is a Best in Futurity and Maturity winner, Top 10 Conformation Dog, Top 10 Obedience Dog, Producer of Best in Futurity and Maturity winning dogs, and #2 Top Producing Sire in 2010…and he’s not done yet. At 9 years of age he added to his accomplishments by winning 3 High In Trials this year. Two at All breed shows, the 3rd at Southland Weimaraner Club’s Specialty. Currently ranked #1 Top Ten Obedience dog in Weimaraners in the U.S.”

This website was last updated on February 9, 2022 by Kim Burnell