Hello! I’m Kim; a Southern California Weimaraner breeder, owner, handler, puppy wrangler, and rescue warrior. Most of the time, we do normal stuff together, like hit up hiking trails, play at the beach, run in the desert, drink in bars, chow in restaurants, make cookies, snooze in hotels, lounge around the house… You know, all the things “crazy dog people” do with their dogs. Just a few photos of the dogs around the house, around town, and on weekend getaways.

Then, sometimes, we jazz it up a bit… 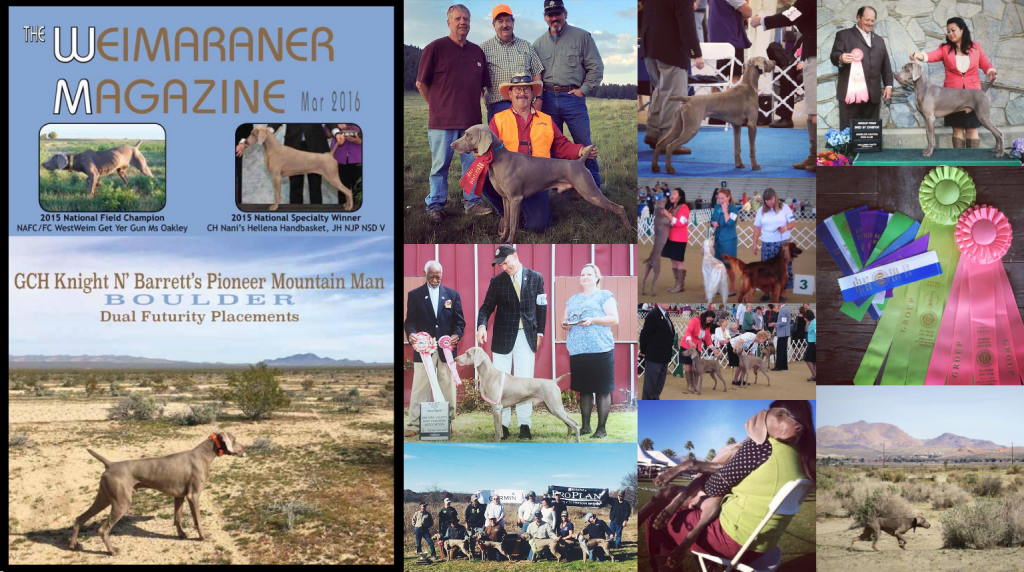 This is Boulder (GCHB Knight n’ Barrett’s Pioneer Mountain Man), my oldest boy, and out of the first litter I ever bred. After a very successful show career, Boulder moved onto the field trial circuit (where he is today) with Rugerheim Kennels/Terry Chandler. I recently just spent a couple of weeks in the White Mountains of AZ at Summer Camp with him. The next time I see him will be at the National Field Trials in Ardmore, Oklahoma. So far, Boulder has 18 puppies on the ground; one daughter is almost a finished show Champion and a few more are just getting started.

This is LadyBug (CH Barrett n’ Star’s Flying Spectacle NSD). In June 2016, “Bug” went WB, BOW and BEST OF BREED for her Third Major to finish her bench championship under Judge David Kittredge at the SoCal Sporting Dog Fanciers Assoc show in Long Beach. Bug is also Winner of the 2016 WCA Western Field Futurity. Sometime this year, she’ll earn a cover on the Weimaraner Club of America’s Monthly Magazine for being this year’s only DUAL-FUTURITY-PLACING WEIMARANER. !!! Just like her big brother Boulder, who earned the same accolade in 2015. 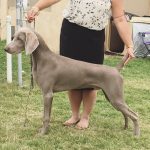 Blaise Pascal (GCH Camelot’s I’m a Travelin’ Man x Trax Jet Stream FDJ) is one of my young Dual Champion-prospect boys.  In June 2017, he made his debut as a show dog at the Southland Weimaraner Club Show Specialty in Ventura, CA, and came home from the weekend with both of his Majors, a Best of Opposite Sex in Puppy Sweepstakes ribbon, and two Best Puppy rosettes. This summer, he went to Summer Camp in the White Mountains with Rugerheim Kennels/Terry Chandler learning how to be huntin’ dawg. 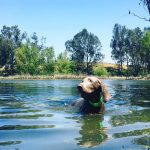 Even Steven (CH Trax Edenrock One Night Stand x Reiteralm Legacy Von Trax) is my other young boy. I knew immediately that when I saw his mother, Feist, running at the field trials that someday, I wanted to own one of her kids. I spent the next year pretty much BEGGING Shirley Nilsson in Canada for one of these puppies, and eventually, down came Steven!!! Spring 2017 found us many-a-times at the local Prado Regional Park swimming in the pond (this kid’s a natural swimmer), or training with birds in one of the fields. As of this summer, Steven is ALSO at Summer Camp, learning how to be a big boy. 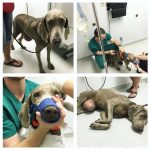 As much as I can, I also dabble in Southern CA Weimaraner rescue by taking in strays to re-rehabilitate and then re-home them. At the moment, I’m fostering a ten-year-old girl who was dropped off at the Baldwin Park Animal Shelter because she was carrying a (rather large) tumor and her family didn’t know how to get it treated. “Libby” is as sweet as they come, and I have no doubt she’ll find a forever home once we get her healthy again!

For more information about me and my dogs, please continue onto the following links:

This website was last updated on February 9, 2022 by Kim Burnell